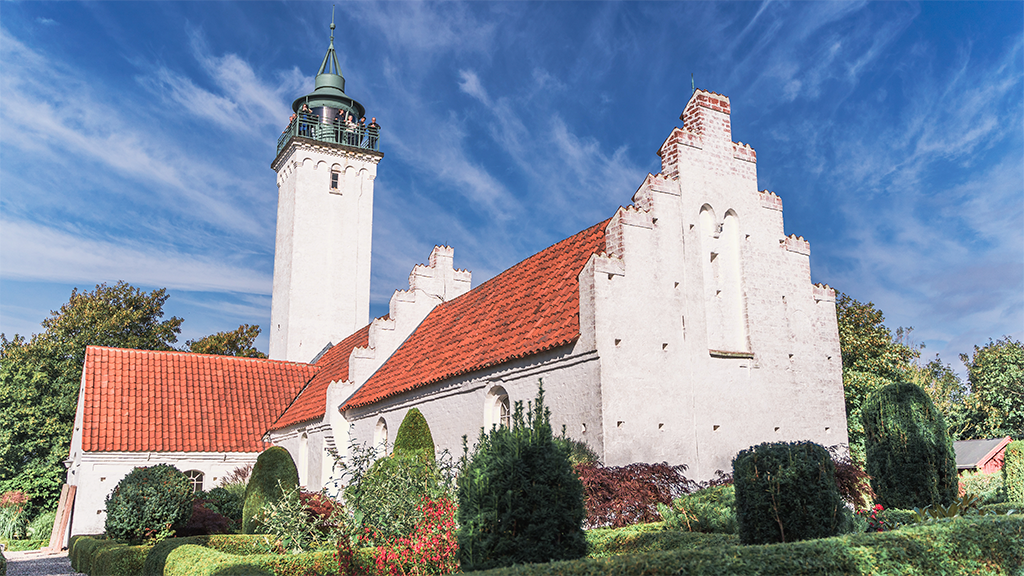 The church on Tunø

The church on the small island of Tunø was probably erected in the 14th century. It was said that before this time the Tunø islanders used to sail to Nordby Church on neighbouring island Samsø to attend service, and the bricked-up door on the church´s north side used to be called "the door of the Tunø islanders" in ancient times.

The church on Tunø has the unusual, if not unique, distinction of having functioned as both a church and a lighthouse, and in the old days the minister was indeed both lighthouse keeper and minister of the church.

The history of the construction of the church stretches back a long time. It was originally built the Romanesque style, but has undergone many conversions and today stands as a Gothic church with ogival filling walls and corbie gables.
In 1820, the height of the tower was increased to 31 meters above sea level.

In 1216 Danish King Valdemar Sejr handed over the island of Tunø to Århus Cathedral. In this connection it can be mentioned that the minister´s and parish clerk's seats, which date from 1500-1525, probably come from Århus Cathedral. Both have beautifully engraved flowers on the ends as well as the coat-of-arms of Bishop Niels Clausen Skade.

Another probable piece of evidence of the church´s with the Cathedral in Århus is the triptych with its late Gothic figures depicting the Virgin Mary as heavenly Queen, standing on the crescent carrying the Infant Jesus on her left arm whilst holding out a bunch of grapes in her right hand (possibly a "Madonna of the grapes" originating from the Rhineland). She is flanked by St. Clemens with the anchor and St. Alexius. This is believed to be the only depiction of St. Alexius in Denmark.

The triptych, the two movable panels of which were painted by the evangelists in 1731, is a cupboard altar dating from approx. 1490.

Romanesque granite font with double lion motif. The pulpit (org. 1630-1650) has primitive evangelist paintings in the arcade panels. Among the frescos, of particularly note is the sepulchral tablet on the north wall of the choir with its fresco painting depicting Vicar Jørgen Hansen who was said to have been tossed by a bull on 31st July 1640.

The vicarage is situated next to the church.